Reefs off the Kenyan Coast in Danger

Coral reefs make up the largest biological structures that currently exist on our planet and take many thousands of years to form [1].  Today, the world’s already deteriorating reefs are further threatened by looming temperature increases due to global climate change. Coral bleaching is the main culprit responsible for the death of these coral colonies [2]. Bleaching occurs when corals lose their relationship with their partners, microscopic algae called zooxanthellae [3]. In a healthy reef, the corals depend on this relationship with zooxanthellae which live inside the coral tissue [3]. Not only to these microscopic algae give corals their brilliant colors, they are the main providers of food for the animals [3]. Under certain environmental stressors, the algae will leave its animal host, leaving the coral bleached [2]. A bleached coral has little means to feed itself and is put at a high risk for disease [2].

Without their xoozanthellae partners, corals take on an eerie white color. source: coralreefwatch.noaa.gov

Causes of coral bleaching also include pollution from runoff, low tides that expose the corals to air, and overexposure to intense sunlight and UV radiation [1]. Temperature increases are, however, the primary cause [1].  Many corals are extremely sensitive to heat stress. In fact, an increase of a few degrees over the corals’ tolerance level can cause bleaching and prove deadly [4].  If the bleaching is severe, it can have debilitating effects on both the ecosystem and any economy that relies on it [1].  It can take decades for a badly bleached reef to fully recover (if it recovers at all) [2]. Predicted stress levels on the East African coast with dark red representing areas most likely to see bleaching between February and May of 2016. source: www.noaanews.noaa.gov

Last October (2015), the National Oceanic and Atmospheric Administration (NOAA) declared the third global coral bleaching event and highlighted reefs that are predicted to be most severely impacted by the event [1]. One such area is the reefs off the coast of Kenya in eastern Africa [1]. The reef extends from just north of the city of Lamu to the nation’s southern border with Tanzania [5].

Currently, there are many groups researching and monitoring Kenya’s reefs including the Kenya Marine & Fisheries Research Institue (KMFRI), Coastal Ocean Research and Development in the Indian Ocean (CORDIO), Kenya Wildlife Services (KWS), and the Wildlife Conservation Society (WCS) [6]. In 1998, a massive bleaching even struck the reef, and data from that event can inform scientists’ predictions about the aftermath of the current global bleaching event [5]. During the 1998 bleaching event, an astounding 90% of coral cover was destroyed [5]. It took over two decades for coral cover to reach between 18 and 40% depending on the area surveyed [6]. One surprising find in monitoring the reef’s recovery was that the recovery of MPAs (Marine Protected Areas) was no faster than that of areas where activities such as fishing were unregulated [6]. However, recovery in newly-declared MPAs was substantially faster than reef recovery of unprotected and older MPAs [6]. It is still unclear what causes this difference in recovery rates, but researchers say there are multiple environmental variables at work [6]. 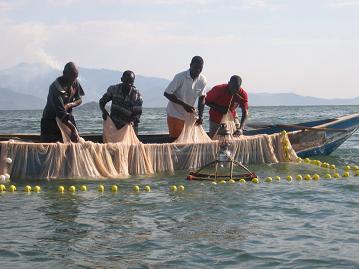 Over a 14 year period that included the 1998 bleaching event, the size of coral colonies decreased significantly [5]. This decrease was in part due to over-fishing of the coastal waters by local fishermen [6] Though the Kenyan government has enacted measures to promote better fishing practices that are less harmful to the reef, unfortunately such policies are hard to enforce [6]. While the fate of Kenya’s reefs is unknown at the moment, predictions from NOAA are less than hopeful. It is likely that these reefs will be dramatically impacted in the months to come. A glimmer of hope exists in the ecosystem’s ability to bounce back from such environmental tragedies and the nation’s growing efforts to protect their natural treasures.