Need Another Reason to Conserve Mangrove Habitats? Think about Your Economy.

Mangroves are a very important ecosystem, and yet they are one of the most threatened and fastest disappearing. Since 1980, between 20 and 35% of mangrove area has been cleared, largely to accommodate coastal development and aquaculture.1 As seen in Figure 1, aquaculture requires vast expanses of space, and this space is often acquired through the destruction of mangroves. Aquaculture alone is responsible for 52% of mangrove habitat loss annually.2 Hopefully these numbers alarm you, as I have demonstrated in my two previous blog postings why mangroves are important to conservation of coral reef ecosystems. The main reasons I provided were that mangroves serve as an important nursery for many reef species and that one specific herbivore, the rainbow parrotfish, was functionally dependent on mangroves, and that loss of this fish would have considerable effects on rates on algal grazing on reefs. Clearly, mangrove conservation is a very effective way to help improve coral reef health. 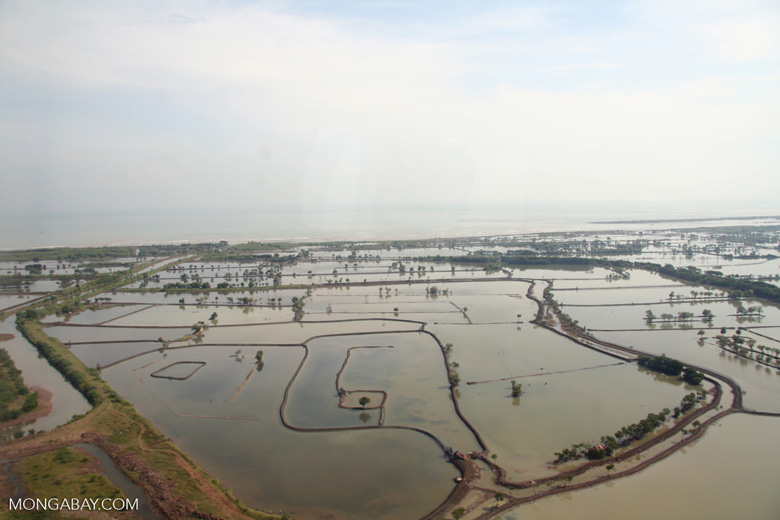 Figure 1. Aquaculture ponds where a mangrove forest once stood in Borneo. (Source: https://news.mongabay.com/2015/09/new-study-exposes-true-costs-of-converting-mangroves-in-southeast-asia/)

However, for many people, as well as many governments, a negative monetary effect of habitat loss is a much more effective call to action compared to implications for connected ecosystems. For this reason, in this final blog post I am going to focus on the roles of mangrove ecosystems that have direct impacts on human populations, as well as their economic value.

Mangroves serve many functions that directly affect human populations. They are especially important because a disproportionate amount of people live in coastal environments: while they account for only 2% of the world’s land area, coastal regions contain 10% of the world’s population.3 Coastal populations are especially vulnerable to climate change and coastal hazards, such as tsunamis, hurricanes, and cyclones. Mangroves can reduce wave energy of coastal hazards, and reduce the height of storm surges.3 In past cyclones, areas protected with mangroves suffered from less loss of human lives and less damage to property, livestock, and other economically important assets.2 The advantages of mitigating the effects of cyclones can not be understated, as the destruction they cause can be enormous and very expensive to clean up, as evidenced by Figure 2.

Figure 2. Devastation as a result of a cyclone in Fiji. Communities protected by mangroves have been show to feature less destruction from cyclones. (Source: http://www.publicfinanceinternational.org/news/2016/02/fiji-appeals-funds-after-destruction-caused-cyclone)

Another way coastal communities are threatened is by land loss, as a result of both rising sea levels and erosion. Mangroves can increase sedimentation and reduce erosion and movement of the sediments.3 This is a result of their complex, dense root structure. Healthy coastal ecosystems have proven to be more effective at protecting shorelines than man-made structures. Another advantage mangroves may have over engineered structures is that they may be able to respond to rising sea levels by increasing in elevation and growing to keep up with the rising seas.3

Mangroves also store a considerable amount of carbon. It has been estimated that mangrove habitats worldwide store 20 Pg of carbon, which is roughly equivalent to 2.5 times annual global carbon dioxide emissions. Additionally, if these ecosystems can persist undisturbed, the amount of carbon stored in mangroves will increase as a result of biological sequestration and carbon burial.4 A practice that has grown in popularity in recent years is for companies or countries to make an effort to offset their carbon dioxide emissions (in addition to making efforts to reduce them). This has included measures such as funding the installation of wind turbines replanting trees in rainforest habitats. Preventing mangrove loss is another viable way to offset carbon emissions, and it is relatively inexpensive economically. Preventing mangrove loss has an estimated cost of roughly $4 to $10 ton-1 CO2.4 Not only is this a cost effective method to offset emissions, it also has many other benefits as it benefits a very vital ecosystem.

Mangroves can have important roles in economies, especially in island communities. Mangroves are a source of both timber and food, and they greatly increase yields for many commercial fishing populatioins. It is estimated that the composite economic value of mangroves in Pacific islands is between $4,300 and $8,500 ha-1 yr-1.1

Although I hope that everyone would care about the health of the ocean, and coral reefs specifically, doing so is not necessary to understand that mangroves are an ecosystem worth preserving. It is obvious that further loss of these habitats should be stopped based on their impact on communities and local economies alone.

Figure 3. A community woks to replant a mangrove forest. Doing so can have many positive effects.(Source: https://evelynanderson.wordpress.com/creativity-action-and-service )

Ultimately, it is not the motivation behind conservation that is important, but rather the action that is taken. Many coastal communities have made efforts to preserve mangrove habitats. As shown in Figure 3, many groups have also done work to replant mangroves lost either from storm or previous removal. Vietnam, a country that is especially threatened by rising sea level, has lost over half of its mangroves. However, the government has begun a program to replant them. The Vietnamese Minister of the Environment believes Vietnam has a small chance to mitigate climate change by replanting the mangroves due to their roles in coastline protection and in absorbing carbon dioxide.5 Hopefully these replanting efforts will not only preserve Vietnam’s coast, but also benefit the coral reefs located nearby.